5 Things has previously discussed 8(a) Program basics and eligibility requirements. But the 8(a) Program isn’t the only socioeconomic program benefiting small businesses. In this post, we’ll begin exploring another crucial program for small businesses: the Historically Underutilized Business Zone—or HUBZone—program.

Here are five things you should know about the HUBZone program.

At its most basic, the HUBZone program is designed to provide economic assistance to economically-depressed geographic areas by awarding federal contracts to small businesses that operate and employ workers in those areas.

The Department of Housing and Urban Development determines which areas qualify as HUBZones, with reference to the latest census data. The SBA then publishes interactive maps that show whether an address falls within a HUBZone.

For example, a qualified census tract HUBZone is shown shaded on the map below (just across the street to the south and east from Koprince Law LLC). Companies with their principal offices located in the blue area might qualify to participate in the HUBZone program, if they meet the other eligibility requirements; those outside of the HUBZone would not. 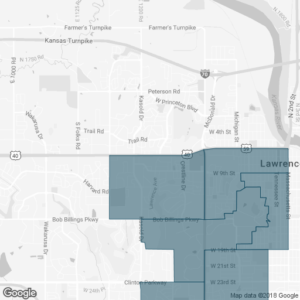 There are four basic requirements a “typical” company must meet to participate in the HUBZone program:

These are just the basic criteria. The last two requirements come with their own quirks, so future posts will explore them in greater detail.

It’s also worth bearing in mind that these are the eligibility criteria for typical HUBZones—that is, those owned by individuals. There are separate eligibility criteria for companies owned by Indian tribes, Alaska Native Corporations, Native Hawaiian Organizations, and Community Development Corporations. We will explore the requirements for these special HUBZone firms in future posts, as well.

This ongoing eligibility can cause heartburn for some companies, particularly regarding the 35% employee residency requirement. Consider the following scenario: a company has 10 employees (4 of whom reside in a HUBZone) at the time it submits its bid but then, before the award is made, one of its HUBZone-residing employees takes a job elsewhere. At the time of the bid, 40% of its employees lived in a HUBZone; at the time of the award, only 33% did. Through no fault of its own, the company would not be eligible for the award.

We’ve seen this scenario happen several times—and have prosecuted and defended protests challenging HUBZone eligibility based on similar circumstances. Maintaining 35% residency supports the underlying goal of the HUBZone program—how would an economically-depressed area reap the benefits from a HUBZone contract if its residents aren’t employed to perform the work? That said, we think SBA ought to consider changing the rules to prevent potentially harsh results like the one seen in the example.

Though it might sound daunting, maintaining eligibility isn’t impossible for most firms. It just takes a little vigilance and a strong, effective compliance plan.

The benefits to participating in the HUBZone program can be enormous: the government’s goal is to award 3% of its prime contracts to HUBZone entities annually. Contracting officers are given broad powers to award contracts to HUBZone entities—including through sole-source awards and set-asides. For contracts issued under full and open competition, moreover, HUBZone companies receive a price evaluation preference.

Questions about this post? Or need help with a government contracting legal issue? Email us or give us a call at 785-200-8919.